Officers with the Richardson Police Department were assisting a disabled motorist on 75 last Saturday night when a suspected DWI driver crashed into the officers’ police vehicle.

Luckily, the officers were not inside the vehicle at the time of the crash and were not injured. The driver was arrested for DWI and possession of marijuana.

Dallas police officers responded to two separate homicides early this morning, and they need your help with information.

The first homicide was reported before 3am at the intersection of Empire Central and the northbound Stemmons Freeway service road (I35E). The victim, identified as a 38-year-old male, was shot and transported to the hospital where he later died. The unidentified suspect(s) fled the scene in a white pickup on southbound Stemmons Freeway service road. Anyone with information regarding this murder is asked to contact Detective Frank Serra at 214-671-4320.

Officers responded to a second homicide just after 5:45am in the 900 block of N. Marsalis Ave. Upon arrival, they located an unconscious person. The victim, a 62-year-old black male, was determined to have died from homicidal violence. Anyone with information regarding this offense is asked to contact Detective Scott Sayers at 214-671-3647.

Rio Vista firefighters along with AMR and law enforcement units are working a major accident on FM 916 near Rio Vista proper.

Careflite has just landed at the scene to airlift out a patient from the crash. Possible motorcycle involved.

Blue Mound Road closed in Haslet due to train accident

All lanes of westbound and eastbound Blue Mound Road are closed at the train tracks just west of FM 156 / Haslet County Line Road due to a train that struck a vehicle.

Reports indicate no major injuries at this time. The roadway is closed for investigation. Take another route.

Multiple Fort Worth firefighters are on scene of a working apartment fire near the 1200 block of Alexis Ave. Heavy fire is showing from the building.

A 2nd alarm has been called for assistance. Avoid this are and watch for responding personnel.

The National Weather Service has concluded two tornadoes occurred yesterday morning west of the immediate DFW Metroplex: one in Mineral Wells and one in northwest Parker County.

The tornado near Mineral Wells has been rated an EF-1. It developed just east of downtown Mineral Wells in an industrial area. Damage to a commercial property and signage was located along US-180. Additional damage to signage, roofing, utility poles, and trees was observed near the US-180 and Garrett Morris Parkway intersection. A commercial automotive repair center located just southeast of the Mineral Wells High School sustained significant roof and wall damage consistent with EF-1 intensity winds. The tornado appears to have dissipated near the US-180 and Washington Road area. No one was killed or injured.

The tornado in northwest Parker County has also been rated an EF-1. It developed along Cabaniss Lane just south of New Authon Road. The tornado tracked east northeast, seriously impacting a site-built frame home located on FM 1885 just south of New Authon Road. Most of the home’s roof was ripped off and deposited into the front yard. Significant damage also occurred to a metal commercial building near this home. The tornado crossed FM 1885 for a short distance, eventually dissipating at as it reached Precinct Road. No one was killed or injured.

The NWS says all damage in the immediate DFW Metroplex was from straight-line winds, and they have no plans to investigate any additional debris areas at this time.

The Dallas Police Department continues its search for Jesus Chavarria-Vasquez, a 32-year-old Hispanic man who is accused of crashing into three pedestrians while they changed a flat tire along eastbound LBJ early Sunday morning.

Police say the suspect, who is identified in the photo below, crashed a Chevy Silverado pickup truck into the three victims and their vehicle, killing the three men, critically injuring another person inside the vehicle, and injuring his own 12-year-old son in the truck.

He fled from the crash scene and police have been looking for him since. The suspect also has a 2008 Cadillac (Texas License Plate #JZS0584) and may also be driving a white work van.

If you have any information regarding Jesus’ whereabouts, you are asked to call the Dallas Police Vehicle Crimes Detective Jackson at 214-671-0009.

The three deceased have been identified as three Asian males, all in their early 20’s.

According to information released by the North Richland Hills Police Department, detectives are now investigating a homicide after a woman was found dead inside of a home early Monday morning.

Officers responded to a private residence in the 7700 block of Amy Lane just before 1:00am on Monday morning regarding an undetermined death.

A man who shares the same last name as the deceased woman was arrested Monday on unrelated charges. He has since been charged with murder.

No other information was released. The cause of death is currently pending.

Traffic alert: I20 in Arlington reduced to one lane for storm repairs

According to TxDOT, the westbound and eastbound lanes of I20 will be reduced to one lane this afternoon while crews work to repair storm damage.

The repairs will be done at the I20 and Bowman Springs exit. Frontage roads will be open, but you can expect heavy delays on the main lanes due to the closure.

TxDOT says the closure could last up to 4 hours. It is best to find another route.

There was an announced closure of I20 in Arlington late last night, but it occurred earlier this morning. Those lanes have been reopened, but this closure is another project.

Officials from the Fort Worth Fire and Police departments along with Office of Emergency Management personnel have blocked off Lamar Street between 5th and 6th Streets due to falling glass from the Frost Tower building.

Thanks to Michael Beard for the banner photo. 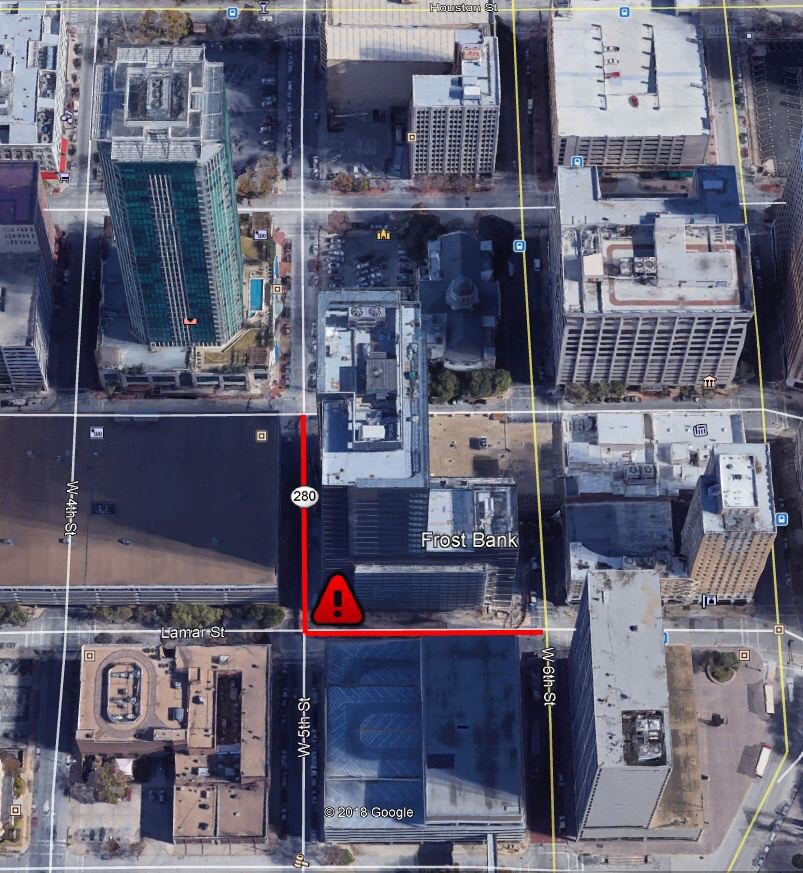