No major injuries after significant crash on I35E overnight in Dallas

Posted on September 7, 2019 by dfwscanner 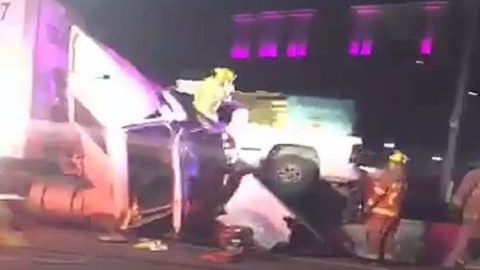 The Dallas County Sheriff’s Office confirms no one was seriously injured after a multi-vehicle crash along I35E overnight in north Dallas.

At around 12:26AM, Dallas sheriffs and fire-rescue personnel were called to the scene of a crash on northbound I35E at the Dallas North Tollway.

Dallas Fire-Rescue responded for extrication and patient care. EMS treated at least two patients on the scene. One patient was transported to Parkland in stable condition. All others did not report any injuries.

A photo of the scene shows the vehicle that made the unsafe lane change (white pickup truck) crashed into the front of the 18-wheeler.