The US National Weather Service confirms a brief tornado touchdown in Denton at approximately 6:56pm this evening.

Reports via emergency management and CASA Radar confirm a brief tornado occurred in the area of W University Drive near Carroll Blvd northwest of the TWU campus. Mostly tree damage was reported.

This area was under a Tornado Warning at the time. Damage assessment teams with the NWS Fort Worth will be surveying additional damage areas across the area tomorrow (weather permitting) to confirm if tornadoes occurred elsewhere.

Mansfield Police Department officers are on scene of a major accident at FM 157 / N. Main Street at Mouser Way in front of Mouser Electronics.

Officials confirm this is a fatality crash. The intersection is expected to be closed for several hours while the investigation takes place.

It is best to seek an alternate route while police work this scene.

Argyle Fire Department is on scene of a flooded neighborhood in the area of Skyline Drive and Crawford Road. Multiple residents in need of evacuation.

Multiple swift water rescue teams have been requested to the scene for assistance. There are multiple flooded roadways in this area. Crawford Road will be closed in this area due to floods.

Flower Mound and Justin FDs are responding to help.

It is best to avoid this area. If emergency responders come to your house and request you evacuate, do so. If you live in this immediate area, stay tuned to notifications by officials.

The Duncanville Police Department is investigating an officer involved shooting in the 600 block of N. Clark Road near Camp Wisdom Road.

Duncanville police officers responded to a suspicious person call at around 1:13pm. When officers arrived, they attempted to make contact with the individual. The individual did not comply with commands, and made statements he had warrants and would not go to jail.

He began reaching for something in a bag while continuing to ignore officer’s direction to stop. After making aggressive movements with his hands inside the bag, officers discharged their weapons and struck the individual.

He was transported to Methodist Dallas hospital where he remains in stable condition. His injuries are described as non-life-threatening. No officers were injured.

The Dallas County Sheriff’s Office is investigating the incident.

Tornado WATCH issued for a portion of North Texas, including DFW

The National Weather Service has issued a Tornado WATCH for a portion of north end of North Central Texas, including the Dallas Fort Worth Metroplex, until 11pm tonight.

There is a chance for strong to severe thunderstorms this evening. Heavy rainfall, frequent lightning, large hail, and damaging winds are all a possibility. A few tornadoes may also develop in any of the stronger storms.

A tornado watch means atmospheric conditions are favorable for supercell thunderstorms to develop tornadoes. Please remain informed and stay updated on the forecast throughout the day. 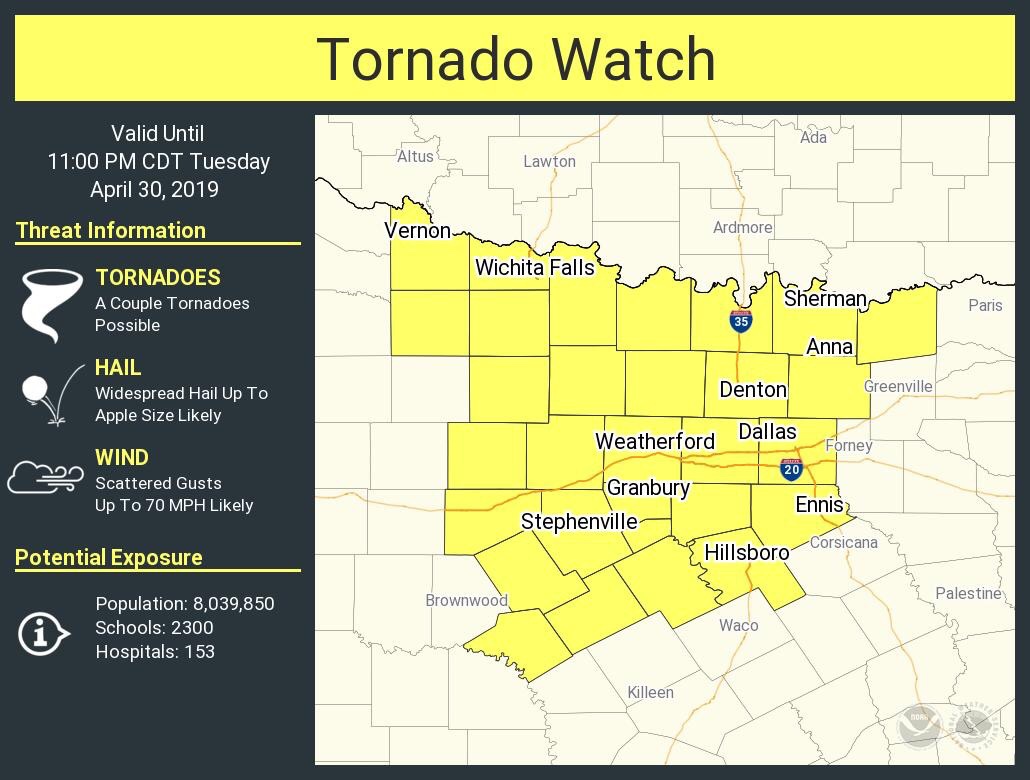 Traffic Alert: I20 closed in Fort Worth due to multiple vehicle crash

Fort Worth Quint 26, Engine 26, Engine 28, multiple FWPD units, and MedStar EMS are working a major accident on westbound I20 near Granbury Road.

Reports indicate it is a multiple vehicle crash. Unknown injuries at this time. All westbound lanes are forced to exit.

It is best to avoid this area while emergency responders clear up the scene.

UPDATE: Three seriously injured in Plano rollover crash after being cut off by another driver

A quick update to the story we posted yesterday evening.

TxDPS troopers are investigating a major accident with vehicle rollover that occurred Sunday evening around 7pm in the westbound lanes of PGBT near Jupiter Road in Plano.

Officials say a silver passenger vehicle was traveling west on the tollroad when another unidentified vehicle cut them off. The driver of the silver vehicle took evasive action and overturned into the center median.

Three people were transported from the scene, all with serious to critical injuries. The driver was taken to Medical City Plano and two children were also transported to a trauma center.

Emergency responders working serious crash on I30 in Fort Worth

Multiple emergency responders are on scene of a major accident along the westbound lanes of I30 near Beach Street.

Fort Worth FD reports one vehicle is on fire. CPR is in progress on one victim.

Battalion 2, Engine 5, Engine 2, Engine 14, Rescue 14, multiple FWPD officers, and MedStar EMS units are on the scene. Heavy delays. It is best to avoid this area.

Numerous FWPD officers, FWFD units, and MedStar EMS are on the scene of a reported major accident near the 4100 block of Miller Ave. at Hardeman Street in southeast Fort Worth.

Fort Worth FD units arrived on the scene after being dispatched to a major accident. They reported someone with a gun was on the scene.

This has prompted a significant police presence in this area. We do not have any further details since FWPD radios are encrypted, but there are a few dozen officers on the scene.

Update – Motorcycle crash. One possible fatality. Reported to be critical on the scene, but died a short time later due to injuries. Investigation ongoing.

Multiple Plano Fire Department units and DPS troopers are on scene of a major accident on the President George Bush Turnpike.

The accident, reported to be a rollover, is on westbound PGBT near Jupiter Road.

Battalion 1, Engine 3, Medic 1, Medic 3, Squad 1, and Truck 1 are all assigned to the incident. At least two people have been transported. Major injuries reported.

Avoid this area due to heavy delays.