A driver has been hospitalized with serious injuries following a high speed crash in Arlington yesterday afternoon.

At around 3:30pm on Sunday, multiple emergency responders were called to the scene along North Collins Street near E. Lamar Blvd after a single vehicle crashed into a pole.

Officials say the driver lost control of the vehicle, crashed off the roadway, and overturned. The vehicle ended up against a large pole, and caught fire.

Bystanders were able to rescue the driver before first responders arrived, according to Arlington police. Paramedics transported him to a local hospital with serious injuries. His condition has not been released.

The Dallas Police Department is investigating an incident at Northpark Mall this afternoon after there were reports of an active shooter.

Dallas PD Chief Eddie Garcia says multiple calls came into Dallas police dispatch just before 1:30pm of a possible shooter in the food court. Off duty and on duty personnel immediately responded and arrived within minutes of the reports.

Police quickly confronted a “mentally disturbed” individual with a skateboard in the middle of the food court. Chief Garcia says the man slammed his skateboard on the ground multiple times, causing the “gunshot” sounds. When people started running away, he made a gun gesture with his hand and mimicked firing shots.

He was taken into custody without incident and is facing charges. No firearms were located during the incident.

Social media was flooded with reports of an active shooter as patrons hurried to exit the store. Luckily, there was no shooting and no one was hurt.

Thanks to Smash da Topic for the scene photo.

The Fort Worth Police Department is investigating a shooting at a home in south Fort Worth.

Just after 9:00am this morning, Fort Worth police were called to a house in the 3900 block of Saddle Ridge Circle after a 19-year-old man was reportedly arguing with a woman. During the argument, he brandished a firearm and a shooting occurred.

Three people have been shot: two victims and the suspect. Detectives say none of the injuries are life-threatening.

“Our gun violence detectives will be making the scene and we will be able to release more information as it becomes available thru their investigation,” said the FWPD.

Thanks to Smash da Topic for the banner photo. 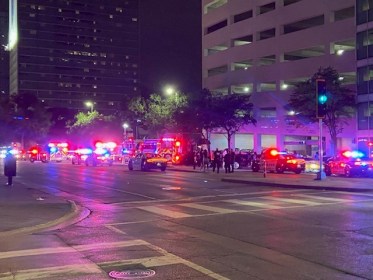 The Dallas Police Department is investigating the fatal shooting of a 34-year-old man at a club in downtown Dallas.

Just after 12:30am this morning, Dallas officers and paramedics were called to the Townhouse Club, 723 N. Pearl Street, after there were reports of a shooting. Emergency responders arrived and located the victim inside the club. He was pronounced deceased at the scene.

There are currently no suspects identified or apprehended. The motive and circumstances surrounding the murder are under investigation.

The Dallas Police Department asks for anyone with information regarding this incident to contact Detective Frank Serra, #10031, at 214-671-4320 or by email: frank.serra@dallascityhall.com, please refer to case #095443-2021.

The Flower Mound Police Department and Texas Rangers are investigating an officer involved shooting that occurred this morning at Flower Mound Fire Station #7.

It all began when 9-1-1 callers reported an armed man pointing a gun at people in the area of Post Oak Park. As officers arrived in the area, the armed man was attempting to enter Flower Mound Fire Station #7, located at 2777 Skillern Road.

When the officers encountered the man at the fire station, he pointed the gun at officers, causing them to fire multiple shots. The suspect was not hit, but officers were able to tase and subdue him before he could hurt anyone.

The suspect is facing multiple charges. His identity has not yet been released.

This incident is the second major incident involving Flower Mound first responders this week. On Wednesday night, three Flower Mound police officers were shot during an encounter with a suicidal subject. Luckily, all three officers are going to be OK.

The Fort Worth Police Department is investigating a shooting that injured two juveniles at a house in the 3700 block of 7 Gables Street.

Police say two men were arguing when one pulled out a gun and shot the other in the thigh. It is believed the same bullet also struck an 11-year-old bystander.

Police the 11-year-old and the 16-year-old shooting victims were transported to a local hospital with non-life-threatening injuries. The shooter’s age has not yet been released.

The details surrounding the incident are still being investigated. No one has been arrested.

Fight leads to shootout at Irving park; one killed, one injured

The Irving Police Department is investigating a shooting that resulted from a fight this morning at the Mountain Creek Preserve park located in the 1000 block of E. Hunter Ferrell Road.

Police say several individuals met up at the park this morning to fight. During the fight, multiple people branded firearms and a shootout occurred. Residents nearby heard the gunshots and called 9-1-1.

When officers arrived at the scene, they found one shooting victim deceased on the scene. He has been identified as a 21-year-old man. A second victim showed up at a local hospital with multiple gunshot wounds. He is currently hospitalized in unknown condition.

During the investigation, it was discovered that several people involved in the fight were at a house on Trinity View Street. Irving PD’s tactical team responded with patrol officers and apprehended 3-4 individuals at the house.

Some of the people are cooperating, but some are not. No arrests have been made.

The investigation is ongoing at this time.

The Texas Department of Public Safety is investigating a serious two-vehicle crash that occurred this afternoon on FM 51 between Weatherford and Springtown.

At around 2:30pm, multiple emergency responders from Parker County and Weatherford were called to the scene on Farm to Market Road 51 between Old Springtown Road and Friendship Road.

Traffic investigators say a driver traveling south on FM 51 crosses into the northbound lane and hit another vehicle head-on. One vehicle ended up overturned in the bar ditch.

FM 51 was closed while crews investigated the scene, but the roadway has been reopened.

The Arlington Police Department is investigating a shooting that occurred sometime overnight or early this morning at the Windsprint Apartments, 2300 Windsprint Way in east Arlington.

A man leaving for work noticed a vehicle with broken glass in the parking lot around 5:00am this morning. He looked into and observed an injured woman in the vehicle, suffering from a gunshot wound. He called 9-1-1 and emergency personnel responded immediately. The woman was transported to a local hospital with life-threatening injuries.

Arlington police traced the vehicle back to an apartment unit at the complex. When they arrived at the unit, they noticed the front door was cracked open. Inside, the found the bodies of three individuals: two adults and one teenager, all suffering from gunshot wounds.

Detectives found two guns inside the apartment complex, and believe the shooter is one of the deceased.

“There were no calls related to residents hearing gunshots overnight that were reported to police,” said APD in a statement. “Detectives have not ruled out the possibility that the shooting occurred earlier than the time that the original resident reported heading to work and finding the woman in the car.”

The identities and relationships between the four individuals is currently being investigated.

The Springtown Police Department is investigating a multi fatality accident that occurred this afternoon on Farm to Market Road 51 just north of Springtown.

At around 12:45pm, multiple emergency responders from Parker and Wise counties were called to a crash at FM 51 and CR 3699. 9-1-1 callers reported multiple people were trapped in a two-vehicle crash.

First responders pronounced three people dead on the scene. A fourth person was extricated with CPR in progress and transported to a local hospital, but pronounced deceased.

FM 51 was closed through the area while police investigated the scene.

The identities of the victims has not yet been released.