UPDATE: Dallas man arrested for killing wife and two sons because he was annoyed with them

The Dallas Police Department is investigating a homicide that occurred earlier this morning at the Rosemont Apartments, 2605 John West Road.

At around 11AM, a man called 9-1-1 and told dispatchers that he had killed his family. Police immediately responded to the scene and located the bodies of a woman and two teenagers. All had been shot and killed.

An arrest warrant indicates the suspect, a 56-year-old man, got into an argument with his wife and children around 10AM. The man told detectives that he had a headache and they were being too loud. They were allegedly yelling at him and “telling him nothing was wrong.”

During the argument, the man grabbed a gun and shot all three of them.

The wife, who was in her 50’s, and her two teenaged sons, 13 and 16, were all pronounced deceased at the apartment.

The suspect was arrested and has been charged with Capital Murder.

One dead, one hurt in overnight northwest Dallas crash

The Dallas Police Department is investigating a fatality accident that occurred overnight in the 3100 block of Royal Lane near Webb Chapel Road.

At around 3AM, a vehicle was driving on Royal Lane when the driver lost control and collided with two trees.

The driver, only identified as a woman, was transported by Dallas Fire-Rescue, but pronounced deceased at a local hospital. A passenger in the vehicle was also transported with undisclosed injuries.

The cause of the crash is under investigation.

The Midlothian Police Department is investigating a crash that sent at least two teenage men to the hospital.

An eyewitness told police two vehicles appeared to be racing each other when one of them bumped into the back of the other. This sent both vehicles into the ditch, one of them overturning multiple times.

The impact was so violent that the engine block detached from the vehicle and landed in the middle of the roadway.

Both drivers were transported to a local hospital by Midlothian Fire Department paramedics. Their conditions are unknown at this time. They have both been identified as a 18-year-old males.

Officers issued a citation of Reckless Driving to one of the drivers for bumping into the other and causing the crash.

Woman killed in drive-by shooting at southwest Fort Worth house

The Fort Worth Police Department is investigating a fatal shooting that occurred late last night in the 3500 block of Plymouth Ave.

Multiple police were dispatched to the house after a 9-1-1 call came in from a woman saying she had been shot.

MedStar EMS responded to the scene and transported the woman to JPS, but she was pronounced deceased at the hospital. She has been identified as a 27-year-old from Fort Worth.

Detectives say a vehicle with one or more suspects drove by the house just before 11:15PM and opened fire, shooting multiple rounds into the house. The woman was the only person struck by the gunfire.

The suspect(s) then fled the scene.

Reports indicate it was a possible-head on collision between two vehicles. One of the vehicles caught fire after the impact.

Haltom City firefighters are working to knock down the vehicle fire at this time.

There are unconfirmed reports that one of the drivers was traveling the wrong direction on the highway.

All lanes of eastbound N. Loop 820 have now been closed and will likely be closed for several hours following this crash. It is best to avoid the area.

The Dallas Police Department is investigating a fatality accident that occurred overnight in the southbound lanes of Interstate 35E at the split for Marvin D Love Freeway (US-67).

Officials say an intoxicated woman was driving southbound and failed to make a turn in the roadway. She drove off the highway and struck a group of people standing outside a stranded vehicle in the grassy median. Multiple vehicles that had pulled over were also hit.

One of the women standing outside the vehicle was critically injured. She was transported by Dallas Fire-Rescue to a local hospital, but pronounced deceased. She has been identified as a 28-year-old woman.

Two other people were hit by the vehicle, but did not sustain any significant injuries.

The driver, a 27-year-old woman, was found to be intoxicated at the time of the crash. She has been arrested and charged with Intoxication Manslaughter.

Multiple emergency responders from Parker County and Tarrant County are currently on scene in the Briar area assessing damage and conducting searches through damaged buildings from the earlier thunderstorm.

A severe thunderstorm moved through around 7PM this evening, bringing significant winds and a possible downburst. The severe winds caused major damage throughout the Briar area, specifically in and around FM 730 and Briar Road.

RV trailers have been overturned, power lines have been downed, and trees have been damaged in the area. There is also damage reported to buildings.

“A lot of property damage, but no serious injuries or deaths reported at this time,” says the Tarrant County Sheriff’s Office.

A large portion of the area has been closed off while emergency crews clear up the impacted infrastructure.

It is best to avoid this area. Stay tuned for updates. 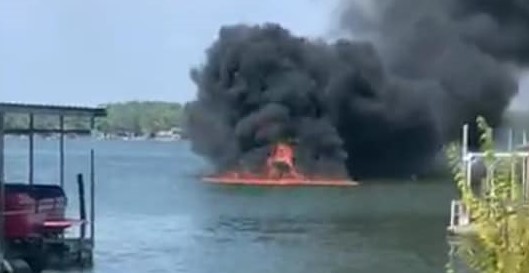 One boat was fully involved with fire and still on the lake. Multiple eyewitnesses reported hearing an explosion immediately before the fire started.

Several people were injured, according to Weatherford PD. A total of three (3) medical helicopters were called to the scene to airlift injured persons to Parkland Hospital’s burn unit.

The Texas Parks and Wildlife is investigating the incident. The boat ramp at Lake Weatherford marina is closed for public access due to the investigation.

The Dallas Police Department is investigating a shooting that injured five people, including a juvenile.

Just after 11PM last night (Friday), Dallas police were called to the 2600 block of Elm Street in Deep Ellum after there reports of a shooting. Dallas Fire Rescue also responded.

Emergency responders found four people wounded at the scene. The fifth victim arrived at a local hospital by personal vehicle.

One of the shooting victims, a 15-year-old male, has been critically injured. The other victims are expected to survive.

UPDATE: Motorcyclist killed in crash on I35W in Burleson

The Burleson Police Department is investigating a fatality accident that occurred this evening along southbound I35W near Renfro Street.

Burleson Fire Department, Police Department, and MedStar EMS were called to the scene just before 6:00PM this evening. All southbound lanes were forced to exit off the highway due to the crash.

One motorcycle was on fire when firefighters arrived. The rider, now identified as a 66-year-old man from Burleson, was pronounced deceased on the scene by EMS personnel.

The cause of the crash is under investigation at this time. More information will be released by Burleson PD at a later time.