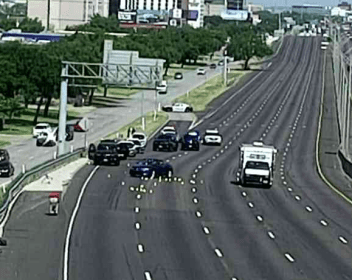 At around 1:21am this morning, Bedford PD and Dallas County Sheriff’s Office were pursuing a vehicle on southbound I35E in Dallas when the driver came to a stop and fired shots at pursuing officers. A Bedford PD officer returned fire and struck the driver, killing him. A passenger in the vehicle surrendered to police.

During the shootout, an innocent driver in a vehicle behind the officers was shot. This driver was transported to a local hospital in stable condition.

No officers were injured in the shooting. It is unknown why police were pursuing the vehicle.

UPDATE: Plane crashes during takeoff at Granbury Airport; no injuries

At around 11:15am this morning, emergency responders were called to the area of W. Pearl Street (Business 377) near Granbury Airport for a reported plane down.

A Rockwell Commander 112 aircraft suffered engine loss on takeoff from Granbury Airport. This caused the plane to go down just south of the airport and skid onto Pearl Street. Luckily, both individuals on board were not badly injured.

Business 377 between Highway 377 and Cherry Lane will be closed for an extended time while crews complete their investigation and removed the downed aircraft from the street.

It’s best to avoid this area.

At approximately 11:57pm, Dallas Police and Fire Rescue were called to the scene of a person struck by a vehicle at the given location. Paramedics arrived and found a woman deceased at the scene.

Investigators determined the woman was standing on the shoulder of the highway near her disabled vehicle. Two people were assisting with her vehicle when the driver of an pickup truck veered onto the shoulder and struck the woman and one of the good Samaritans. The woman was killed and the man was transported to a local hospital for treatment of non-life-threatening injuries.

A witness driving behind the pickup truck observed sparks when he struck the stalled vehicle and had followed him to his residence before returning to the accident location to see what was hit. Police were sent to the suspect’s residence where they found him and placed him under arrest for Intoxication Manslaughter, Intoxication Assault as well Fail to Stop and Render Aid.

At around 10:30am this morning, a kayaker fishing on a small creek in south Arlington located a body floating in the water. He returned to shore and notified authorities of the discovery.

Arlington Fire Department’s dive team and Arlington PD responded to the scene along I-20 between Bowman Springs Road and SE Loop 820. Crews recovered the body of an adult male from the water.

“There were no obvious signs on the body or the surrounding banks to explain what led to his death,” police say.

The man did not have any identification on him. At this point, authorities have been unable to identify him.

The Crowley Police Department is investigating a shooting that occurred Saturday evening at a residence in the 1000 block of McDonald Drive.

Officers were originally called to a crash in the 1000 block of Wheatfield Lane. A 9-1-1 caller stated a vehicle had crashed into the fence of a residence. When officers arrived, they determined the driver had been shot. Crowley paramedics transported him to a local hospital where he was pronounced deceased. He has been identified as a 36-year-old man from Fort Worth.

As officers worked the crash scene, they were also called to a home in the 1000 block of McDonald Street where the shooting reportedly took place. One person was found to be shot at the home. Paramedics transported the resident to a local hospital with serious, but stable injuries.

Detectives believe the driver of the vehicle was a home invasion suspect. The suspect and a homeowner on McDonald Street exchanged gunfire and both were shot. After shots were exchanged, the suspect drove off and eventually crash at the Wheatfield Drive location. Police say the victim and the suspect knew each other.

Officials believe this was an isolated incident and there is no immediate threat to the public. The investigation is ongoing.

The Dallas Police Department is investigating a homicide that occurred Saturday night at an apartment complex in Oak Cliff.

Dallas Fire-Rescue transported both females to a local hospital. One of them, a 16-year-old, was pronounced deceased at the hospital. The other, a 17-year-old, is listed in stable condition at this time. Both were located nearby at the Mandalay Palms Apartments, 7501 Chesterfield Drive.

The Dallas Police Department Homicide Unit is asking for the public’s help and asks anyone with information to contact Detective Timothy Johnston at 214-671-3523 and email:  timothy.johnston@dallascityhall.com.  Please refer to case number 128482-2022.

The Texas Department of Public Safety is investigating a fatality accident that occurred late Saturday night along County Road 3385 near Paradise.

Around 10:07pm, emergency responders from Wise County were called to the scene after a vehicle reportedly crashed through a fence. Wise County EMS placed a medical helicopter on standby due to reports of severe injuries.

Medic 2 arrived to find a heavily damaged vehicle that had crashed into a fence. The driver was critically injured in the crash. Paramedics rushed him to Wise Health System, but he did not survive his injuries.

Officials have identified him as a 42-year-old man from Boyd. They say he was traveling at an unsafe speed.

Fort Worth driver critically hurt in fiery rollover along I30

The Fort Worth Police Department is investigating a serious accident that occurred around 8:15pm this evening along lanes of West Freeway (Interstate 30) near West Loop 820.

Multiple emergency responders from Fort Worth FD, PD, and MedStar EMS responded to the scene and found one vehicle overturned off the roadway and on fire. Paramedics located the driver and transported him by ambulance to JPS with critical injuries.

The driver may have also been shot twice, officials say. Doctors from the hospital notified police of the discovery once the driver arrived at the hospital. Medical personnel found what’s believed to be two separate gunshot wounds.

Fort Worth’s Traffic Investigations Units along with Gun Violence Unit are investigating this incident. Expect police activity in this area.

At 6:54pm this evening, Dallas firefighters were called to a home in the 2600 block of Hudspeth Avenue for a reported structure fire. First-arriving units reported a home was fully involved with flames.

Witnesses at the scene reported that an individual may be trapped inside. Firefighters immediately deployed hose and made entry into the house to rescue the individual. As they were searching the house, firefighters located an unresponsive elderly man. He was rescued from the burning home, but determined to be deceased as a result of the fire.

Two remaining residents, an adult man and female, were uninjured. The American Red Cross is assisting them.

The cause of the fire is undetermined at this time.

At 11:25pm, Dallas Fire Rescue and Police responded to the 9900 block of E. Northwest Highway near Audelia Road for a major accident.

Officials say a vehicle was traveling eastbound on Northwest Highway when the driver crashed off the roadway and hit a concrete barrier. Impact from the collision caused the vehicle to catch fire.

The driver was pronounced deceased at the scene.

The cause of the crash is under investigation.