Back on September 16th, a Tarrant County Sheriff’s deputy received a credible tip about a threat to the Everman High School homecoming football game. The threat indicated the suspect was currently driving to the homecoming game to utilize a weapon he had obtained earlier that day. The Sergeant deputy responded towards Everman and notified other agencies about the threat.

Everman police officers working the homecoming game were notified of the threat. More officers were dispatched to the football field for added security.

Officers observed a vehicle driving on Race Street near the football stadium matching the description given to the Tarrant County sheriff’s deputy. A felony traffic stop was conducted and the driver pulled over at the entrance to the stadium. Three people were ordered out of the vehicle and detained for questioning.

Police recovered an AR Pistol and a 60-round magazine from the vehicle.

Two of the occupants inside the vehicle, 18-year-old Brandon Gipson and 18-year-old Isaac Cooper were arrested at the scene and have been charged with Unlawful Carrying of a Weapon in a Prohibited Place, Terroristic Threat and Endangering a Child. All of these charges are felonies.

“Great work by TCSO and Everman Police in averting what could have been a dangerous and deadly incident,” said the Tarrant County Sheriff’s Office in a statement.

Sheriff’s deputies were called to a fight at the cabaret just after 4:30am. The fight spilled outside into the parking lot when a group of patrons exchanged gunfire with club security. During the shootout, a total of four people were injured.

“This business has become a dangerous nuisance,” says Tarrant County Sheriff Bill Waybourn. “We’ve had several shooting incidents there over the last few years. This creates a dangerous situation for that community.”

Three arrests have been made, all charged with Aggravated Assault with a Deadly Weapon.

Person fatally struck on I-20 in Arlington

The Arlington Police Department is investigating a fatality accident that occurred sometime this morning along Interstate 20 near Green Oaks Blvd.

At 8:42am, Arlington police received a 9-1-1 report of “matter” on the highway. Emergency responders determined a person had been fatally struck while crossing the highway on foot.

Police believe the driver who first hit the pedestrian fled the scene; thus, they are investigating this incident as a hit and run.

All lanes of westbound I-20 were closed at Highway 287 while APD investigated the crash.

The Tarrant County Medical Examiner took possession of the bodily remains and will make positive identification on the deceased person.

At 5:02pm this evening, Fort Worth police responded to the QuikTrip at 324 Clifford Center in far west Fort Worth after a shooting victim arrived at the store.

Dispatched information indicates a man came into the store saying his cousin had been shot.

Paramedics responded to the scene and located a gunshot wound victim inside his vehicle. He was pronounced deceased.

Detectives are still working to track down additional details about where the crime occurred.

More details will be provided when police release a statement.

Truck crashes off I-20 bridge in Weatherford; one airlifted to hospital

The Weatherford Police Department is investigating a major accident that occurred earlier this evening along westbound Interstate 20 at Tin Top Road.

At around 8:00pm this evening, Weatherford FD and PD along with PCHD EMS responded to the area of Tin Top Road and the I-20 service road after a semi truck crashed off the highway. Reports indicate the semi collided with a vehicle on Tin Top Road.

CareFlite was requested to the scene and landed at nearby Weatherford High School. They airlifted one patient to JPS, unknown condition.

We have reached out to Weatherford PD for additional information regarding this crash. Expect an update later tomorrow.

UPDATE: Motorcyclist dies after being shot by driver in Azle

The Azle Police Department is investigating a homicide that occurred yesterday along Highway 199.

At 12:24pm, Azle PD along with Fire/EMS units responded to the area of Highway 199 and Porter Drive for a major accident with shots fired. Crews arrived to find a critically injured motorcyclist who had been shot.

Paramedics requested CareFlite to the scene. The helicopter airlifted the motorcyclist to Texas Health Harris Fort Worth with life-threatening injuries. The motorcyclist, identified as a 43-year-old Azle man, did not survive.

Police say the rider was shot by another driver. They did not say whether the suspect driver stopped or continued on without rendering aid.

Anyone with information about this incident is encouraged to contact the Criminal Investigations Division at 817-444-3221. 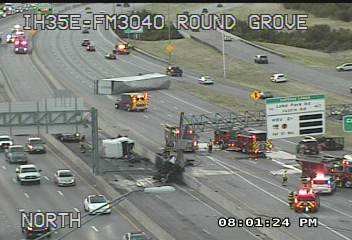 The Texas Department of Public Safety is investigating a serious crash that occurred late Wednesday night along the President George Bush Turnpike in Garland.

At 11:34pm, Garland FD/EMS and DPS Troopers responded to the eastbound lanes of the President George Bush Turnpike near Firewheel Parkway for a major accident.

UPDATE: Plane crashes during takeoff at Granbury Airport; no injuries

At around 11:15am this morning, emergency responders were called to the area of W. Pearl Street (Business 377) near Granbury Airport for a reported plane down.

A Rockwell Commander 112 aircraft suffered engine loss on takeoff from Granbury Airport. This caused the plane to go down just south of the airport and skid onto Pearl Street. Luckily, both individuals on board were not badly injured.

Business 377 between Highway 377 and Cherry Lane will be closed for an extended time while crews complete their investigation and removed the downed aircraft from the street.

It’s best to avoid this area.

Fort Worth driver critically hurt in fiery rollover along I30

The Fort Worth Police Department is investigating a serious accident that occurred around 8:15pm this evening along lanes of West Freeway (Interstate 30) near West Loop 820.

Multiple emergency responders from Fort Worth FD, PD, and MedStar EMS responded to the scene and found one vehicle overturned off the roadway and on fire. Paramedics located the driver and transported him by ambulance to JPS with critical injuries.

The driver may have also been shot twice, officials say. Doctors from the hospital notified police of the discovery once the driver arrived at the hospital. Medical personnel found what’s believed to be two separate gunshot wounds.

Fort Worth’s Traffic Investigations Units along with Gun Violence Unit are investigating this incident. Expect police activity in this area.