Man on tracks hit, killed by train in Haltom City

The Haltom City Police Department is investigating a fatality incident involving a train and a pedestrian that occurred today around 4:00pm.

Haltom City police and fire along with MedStar EMS were called to the 6100 block of Denton Highway near Western Center. A Union Pacific train had stopped after reportedly hitting a man on the tracks.

Officers located an adult man who was deceased on the scene.

No one else was injured. The train conductors and crew are cooperating with the investigation. At this time, officers are still working to identify the man and determine why he was on the tracks.

“Please use Huddleston St. to Western Center Blvd. as a detour for the time being. We expect the train to be able to regain operations shortly.”

An off-duty Arlington police officer escaped serious injury this morning after he was assaulted and robbed while getting gas at the QT on E. Division Street and Collins Street.

Just before 7:30am this morning, an Arlington police officer had just left his shift on the east side of town when he stopped at the QT to get gas in his personal vehicle. As he was standing at the gas pump, a while passenger car pulled up to the pump beside the off-duty officer’s personal vehicle.

It was at this time that multiple juveniles suspects got out of the vehicle and began assaulting the officer. One juvenile punched him in the face and another pistol-whipped him in the head. The off-duty officer was armed, but complied with the robbery.

The suspects took the officer’s wallet and phone and drove off in the white car.

A few hours later, the Dallas Police Department pulled over the suspect’s vehicle at a convenience store in the 2100 block of E. Ledbetter Drive. The vehicle was determined to have been stolen.

“The information we have right now leads us to believe this was a crime of opportunity and the officer was not targeted based upon his affiliation with law enforcement,” said Chief of Police Al Jones.

The Colony Police Department has arrested a man for allegedly robbing and killing a man in their city over the weekend, and then later dumping the man’s body in a small area of Lake Lewisville.

On Sunday, detectives say the 24-year-old suspect, Elijha Norman, met up with a 19-year-old man in The Colony for undisclosed purposes. During the meeting, Norman reportedly robbed and shot the 19-year-old man.

After the shooting, police say he dumped the victim’s body in a wooded area at Lake Lewisville near the 3800 block of Overlook Court.

The 19-year-old man was reported as an endangered missing person on Sunday.

Norman has been arrested and charged with Tampering with Evidence and Capital Murder.

Child critically injured in crash on I35W in Fort Worth 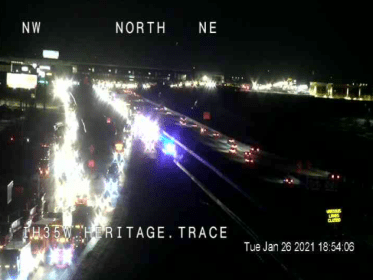 The Fort Worth Police Department has closed all southbound lanes of I35W near Heritage Trace Parkway while they complete an accident investigation from an earlier collision.

At around 3:30pm this afternoon, multiple emergency responders were called to a multiple vehicle crash on southbound I35W. Initial information indicates three vehicles were involved.

According to officials, multiple people were injured in the crash, including at least one child. MedStar had a difficult time getting to the crash due to stopped traffic. When paramedics arrived, they quickly transported a pediatric patient to the hospital with critical injuries. At least one other person was seriously hurt as well.

As of 7:15pm, all lanes of southbound I35W remain closed for police investigation. It is best to avoid this area.

The Fort Worth Police Department is investigating a fatality accident at the intersection of FM 156 and Highway 114 near the Texas Motor Speedway.

At around 4:45pm this evening, multiple emergency responders from Justin Fire/EMS, Denton County Sheriff’s Office, Fort Worth Fire, Fort Worth Police, and MedStar EMS all responded to the scene after a collision was reported involving a school bus and a passenger vehicle.

First arriving units reported an adult woman was unconscious and not breathing inside the vehicle. Paramedics pronounced her deceased on the scene. A man was transported to a local hospital with injuries. His condition was not disclosed. Extrication was required.

A Northwest ISD bus was involved in the crash, but no students were on board. MedStar reported the school bus was not occupied.

Lanes of the roadway have been closed while police investigate the scene. It is best to avoid the area.

As reported on DFW Scanner Saturday night, the Haltom City Police Department responded to an injured person lying in an apartment breezeway at the Northern Cross Apartments, 4200 Northern Cross Blvd, around 9:30pm. The individual was pronounced deceased at the scene.

An investigation into the murder is ongoing at this time. Haltom City police have released an update, stating the woman was a food delivery driver. She has been identified as a 31-year-old female.

The Tarrant County Medical Examiner’s Office has not publicly released her cause of death. The 9-1-1 caller and police both reported she was suffering from obvious injuries, but officials have not said how she was killed. Police have said they are not released the cause of death for “investigative purposes.”

Anyone that has information about this incident can call the Tarrant County Crime Stoppers at 817-469-8477 or the Detective assigned to the case at 817-222-7027. Tips can be anonymous.

Man was rendering aid when he was struck, killed by vehicle on I-30, Fort Worth police say

The Fort Worth Police Department is investigating a fatality accident that occurred overnight along Interstate 30 near Beach Street in east Fort Worth.

At around 2:00am, Fort Worth firefighters, police officers, and MedStar paramedics were called to a crash at I-30 and Beach Street. When emergency responders arrived, they found one person was deceased on the scene.

Traffic investigators believe a wrecked vehicle was stopped on the highway after a collision with an 18-wheeler. A passing driver got out of his vehicle and was rendering aid to the wrecked vehicle when he was struck by another vehicle. It is unclear if the driver stopped at the scene.

The man was pronounced deceased at the scene. He has been identified as a 27-year-old man from Arlington.

Fort Worth PD’s Traffic Investigations Unit is investigating the crash.

At around 9:00pm, multiple emergency responders from the Weatherford Fire Department, Police Department, Lifecare EMS, and DPS troopers all responded to a crash in the westbound lanes of Interstate 20 near South Bowie Drive. Several vehicles were involved in the crash, including an overturned pickup truck.

Preliminary information from Weatherford PD indicates the driver of the pickup truck caused the initial crash. He has been identified as a 22-year-old male from Stephenville, who was later arrested for Intoxication Assault causing Serious Bodily Injury. A passenger in his pickup, also a 22-year-old male, was ejected from the vehicle, according to police. He was transported to a Fort Worth hospital with serious injuries.

A total of 11 vehicles were involved in the sequence of crashes.

7 victims of the accident were taken to area hospitals with non-life threatening injuries.

All lanes of westbound Interstate 20 were closed for hours while police cleared up and investigated the scene.

One person killed in overnight crash along 635 in Farmers Branch

The Farmers Branch Police Department is investigating a fatality accident that occurred around 2:30am in the westbound lanes of LBJ (635) between I35E and Luna Road.

“All lanes of West Bound LBJ Freeway @ Luna Rd. is now open after being closed for several hours due to a Major Accident” reported the Farmers Branch PD on their Facebook page at 8:00am.

Reports indicate the deceased victim was either ejected or hit by a vehicle after the crash. We will update this story with any additional information.

At around 9:30pm this evening, a resident at the apartment noticed a person lying in a breezeway with blood on her. The resident reported there were obvious signs of injury to the individual. Haltom City police and fire along with MedStar EMS all responded to the scene.

Police and paramedics located the woman and pronounced her deceased. She had obvious signs of major trauma, according to Haltom City police. No age or identifying characteristics were released pending notification of family.

At this time, the Haltom City Police Department and Crime Scene are processing the scene for their homicide investigation. No information has been released about a suspect or possible motive in this case.