Officials from the Fort Worth Fire Department, Fort Worth Police Department, and MedStar EMS have released additional details regarding the multi-vehicle accident today on Interstate 35W.

As originally reported, multiple 9-1-1 calls came into dispatch around 6:00am regarding a significant crash on the southbound side of I35W express near Northside Drive.

When emergency responders arrived, the crash was still occurring.

All in all, 135 vehicles were involved in the crash, according to Fort Worth PD. Six people have been found deceased in the wreckage, including a 45-year-old man and a 34-year-old woman, both from the area.

As of 9:30pm, crews remain on the scene clearing up debris and wreckage.

More winter weather is expected to impact North Texas in the coming week. Please, if you must travel, use extreme caution, especially on elevated roadways and overpasses where ice can form.

The Dallas Police Department is investigating a fatality accident that occurred overnight along Interstate 45.

At 12:55am, multiple emergency responders with the Dallas Police Department and Dallas Fire Rescue responded to the scene of a single-vehicle crash on northbound Interstate 45.

Traffic investigators say the driver of a vehicle was traveling at a high rate of speed when the vehicle hit a patch of ice. This caused the driver to lose control and hit a guardrail. The vehicle flipped over and hit a pole.

The driver and passenger were pronounced deceased at the scene. A third occupant sitting in the back seat was transported by Dallas paramedics to a local hospital with life-threatening injuries.

Roads remain icy at this hour. Please slow down and use caution when driving.

The Dallas Police Department says icy conditions were to blame for an 18-vehicle crash along Interstate 45 late last night that claimed the life of one driver.

At around 11:15pm last night, the Dallas Police Department and Dallas Fire Rescue were dispatched to the scene on the elevated service road of Interstate 45 near MLK Blvd. The first vehicle hit a patch of ice along the bridge and hit the wall. This caused several other vehicles to collide in a chain reaction crash that lasted for several minutes.

During the crash, a motorist got out of his vehicle and was subsequently struck by at least one other vehicle. He was pronounced deceased at the scene.

A Dallas patrol officer’s vehicle was also hit in the crash, but the officer was uninjured.

Slow down and use caution if traveling today, especially on elevated roadways! 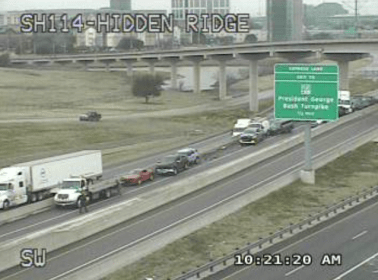 Around 7:00am this morning, multiple emergency responders from the Irving Fire Department and Irving Police Department were called to the scene of a multiple vehicle crash on eastbound Highway 114 near O’Connor Road.

A total of 14 vehicles were involved in the collision. Two people were injured in the crash and transported to local hospitals with undisclosed injuries.

The accident impacted both the main and express lanes of Highway 114. Icy conditions were reported by police officers earlier this morning.

The cause of the crash remains under investigation, although likely to be weather related.

I35W closed in Fort Worth due to massive pileup, Mass Casualty Incident declared

The accident(s) occurred around 6:00am this morning after icy conditions were reported on elevated bridges and overpasses.

It is still unclear how many people have been injured, says MedStar. Paramedics and firefighters are still working to find and extricate injured people. The department’s AMBUS, a high capacity ambulance bus vehicle, has been on the scene providing assistance for all the injured people.

There have been reports that there be as many as 100 vehicles involved in the crash.

A Mass Casualty Incident has been declared.

Update – Reports of at least three fatalities involved in this crash.

At around 5:30pm last night, multiple emergency responders from the Briaroaks FD, Johnson County EMS (AMR), DPS Troopers and Johnson County sheriffs deputies were called to the scene of a crash on E. Renfro Street in front of the Cana Baptist Church.

Firefighters extricated the injured driver and she was transported by air ambulance to JPS Hospital in Fort Worth. Her condition is unknown at this time. She has been identified as a 51-year-old woman from Burleson.

The driver of the SUV was not seriously injured.

The roadway was temporarily closed during the investigation and then reopened.

Posted on February 7, 2021 by dfwscanner

The Dallas Police Department is investigating a reported murder-suicide incident at an apartment complex in northeast Dallas.

This afternoon at around 4:30pm, Dallas police officers responded to a person firing shots at an apartment complex in the 9300 block of Summerwood Circle. When officers arrived, the suspect fired shots at the officers and hit one of the police cars. No officers were injured.

The department’s SWAT team was called and initiated a standoff with the suspect. After several attempts to get the suspect to surrender, officers made entry into the apartment unit and found two women and one man deceased from gunshot wounds.

Posted on February 6, 2021 by dfwscanner

The Dallas Police Department is investigating a serious crash where a man was critically injured in the Pleasant Grove area.

On Friday evening, the Dallas Fire Rescue and Dallas Police Department were dispatched to the 100 block of South Masters Drive for a major accident.

Investigators believe an SUV was traveling northbound on Masters Drive when the driver side-swiped a vehicle turning onto Masters from Old Seagoville Road. This caused the the driver of the SUV to loose control and hit a pole. The driver was ejected from the vehicle and later struck by another vehicle.

The male driver was transported to Baylor Dallas hospital in critical condition. No charges are pending, according to police.

Posted on February 6, 2021 by dfwscanner

Last Tuesday, February 2nd, the Arlington Police Department was contacted by an individual who reported a missing relative from the 900 block of Pinion Drive. The 22-year-old missing man was not responding to texts or calls from family members and friends.

On Thursday, February 4th, a Texas Department of Transportation crew located a body in a culvert along State Highway 360 near Harwood Road. It was determined to be the missing man from Arlington. His body was transported to the Medical Examiner’s Office where the death was determined to be a homicide by gunshot wound.

Detectives have not ruled out the possibility that the victim was placed at this site after the death.

Posted on February 5, 2021 by dfwscanner

The Texas Department of Public Safety is investigating a fatality accident that occurred this afternoon at a rural Johnson County intersection.

The driver and passenger of the pickup truck who rear-ended the first pickup were not injured.

The driver and one of the passengers of the slowing pickup truck were transported to Texas Health Harris Fort Worth hospital with injuries. Two other passengers were pronounced deceased at the scene.

The driver of the third pickup truck was transported to Texas Health Cleburne hospital with injuries.

The investigation is still ongoing at this time.