One person killed after high water submerges vehicle near Palmer 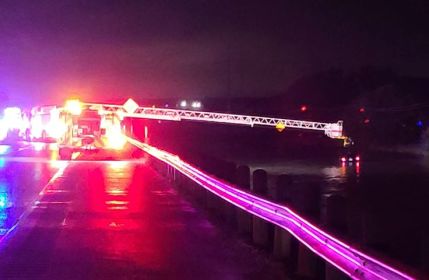 The Palmer Police Department is investigating the death of a man who died in a high water incident last night.

Around 9:00pm, multiple emergency responders were called to the Interstate 45 service road just south of town regarding a water rescue. A vehicle stalled as the driver attempted cross the flooded service road. The family inside the vehicle retreated to the roof of the vehicle and were rescued by Ennis firefighters utilizing their aerial truck.

While that rescue was in progress, emergency responders were notified that another vehicle was submerged and swift waters swept it away. Midlothian Police Department and Red Oak Fire Department were contacted to assist with a drone and water rescue team, respectively.

The driver of the vehicle was found deceased 60 yards away from the service road. He has been identified as a 67-year-old man from Red Oak.

Folks, driving through a flooded roadway to save a few minutes on your commute can be deadly. It is not worth it. You do not know if the road has been washed out, or how fast the currents are flowing. You put yourself, bystanders, and first responders in harm’s way. Take the few extra minutes to find another safer route to your destination. Turn Around; Don’t Drown!