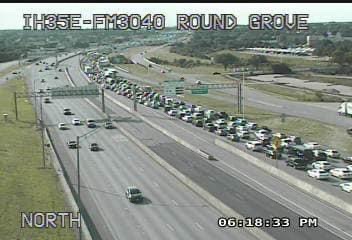 The Lewisville Police Department is investigating a fatality accident in the northbound lanes of I35E near Business 121.

At 4:45pm, Lewisville Fire/EMS and Police responded to the crash involving a motorcyclist and two vehicles.

Investigators believe a driver was traveling northbound on the highway and changed lanes into a motorcycle. The collision caused the motorcyclist to be ejected from the bike and struck by another vehicle. Paramedics pronounced the motorcyclist deceased on the scene.

Both drivers stopped to render aid and remained at the scene.

The investigation is still ongoing so it’s too early to know if the driver will face any charges, police say.

All northbound lanes of I35E have been closed while police investigate the scene. They hope to have the highway open before 10:00pm.