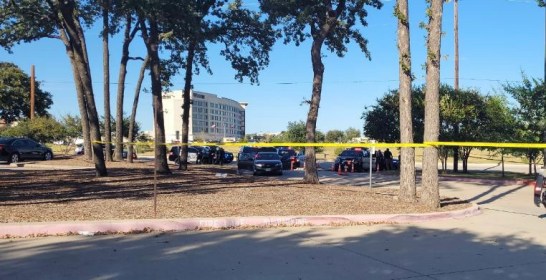 At around 12:30pm today, North Richland Police officers were dispatched to a gunshot wound victim outside an apartment complex in the 1600 block of Weyland Drive.

When officers arrived, they found a 26-year-old man deceased on the scene. Eyewitnesses observed the suspect flee the scene in a dark gray colored sedan.

Detectives with the North Richland Hills PD and surrounding agencies quickly identified a person of interest in the homicide. Officers tracked down the person of interest in Southlake and attempted to stop the vehicle. The driver pulled over into a parking lot along the eastbound Highway 114 service road near Carroll Avenue and brandished a firearm. Police say the man pointed the gun at officers, leading four of them to open fire. CPR was administered on the suspect. He was transported to a local hospital in critical condition. There is no update on his condition.

North Richland Hills police identified the person of interest as a 28-year-old man.

Multiple law enforcement agencies are working the homicide and subsequent officer involved shooting. We will provide any updates as we receive them.

Thanks to Michael Beard for the scene photo.